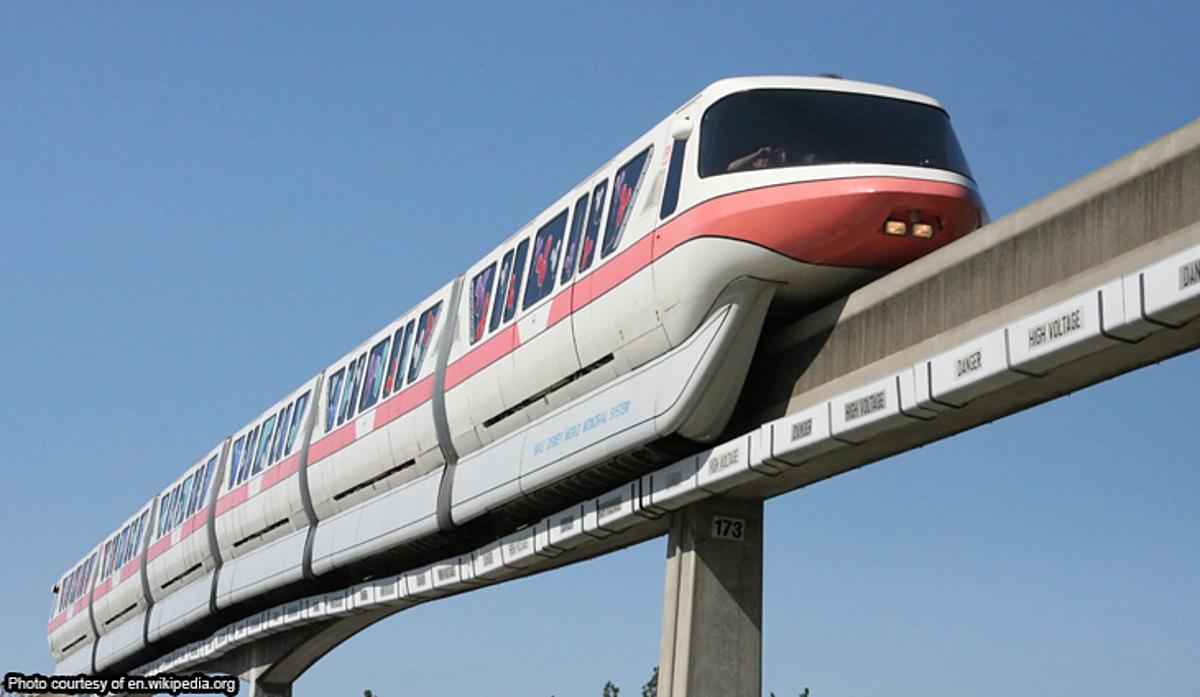 Residents and those working in Pasay City will soon enjoy easier public transportation after the Department of Transportation (DOTr) and the city government signed a deal for the construction of a monorail and extension of the Epifanio Delos Santos Avenue (Edsa)-Tramo flyover.

Aside from its benefits to commuters, he said the project will also create jobs.

He said the project is a partnership between the DOTr, Pasay City government, and SM Prime Holdings.

On Sept. 7, the Pasay City government and the SM Prime Holdings made a joint presentation on the project to the DOTr. By Raymond Carl Dela Cruz 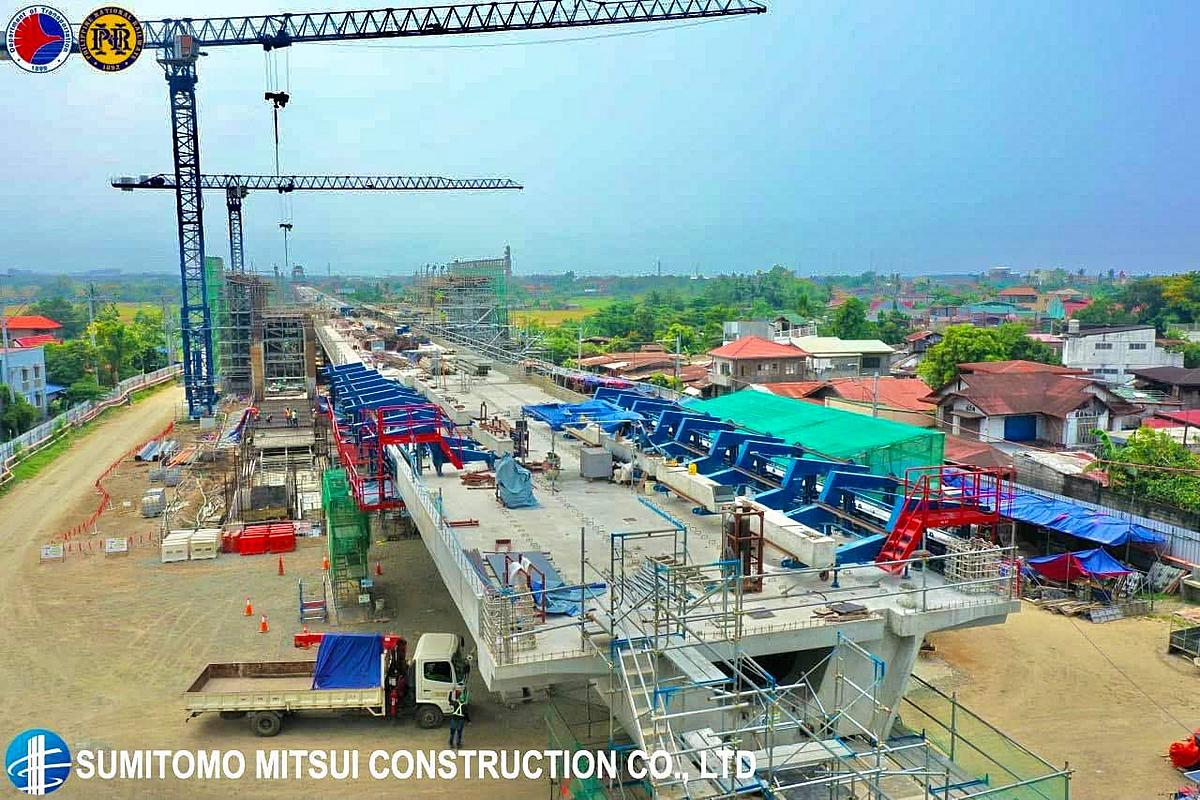 The construction of the 38-kilometer Philippine National Railways (PNR) Clark Phase I project is on track with overall progress rate of almost 50 percent, Department of Transportation (DOTr) Secretary Arthur Tugade said on Monday. Tugade, together with Governor Daniel Fernando, visited and inspected the ongoing construction at the Balagtas Station site in Barangay Borol 1st, which is part of the North-South Commuter Railway (NSCR) Project in this town. He said the 24/7 construction of the railway started in February 2019 and is expected to be completed by the second quarter of 2024. “It is considered to be one of the first major applications of the span by span method here in the Philippines for infrastructure projects,” Tugade told the Philippine News Agency in an interview. The package, he said, is a 14-kilometer long viaduct with three stations, namely Balagtas, Guiguinto, and Malolos. The future PNR railway will sit on top of the elevated concrete section where piers span between 40 to 50-meter distances. “The viaduct of the piers are to be connected by using the Span by Span and Balanced Cantilever Construction Method. Using precast concrete box girders of 60 to70 tons each which were cast here in our Calumpit Yard,” Tugade said. Abigail Verzosa, quantity surveyor manager of Sumitomo Mitsui Corp., contractor of the project, said they already completed the launching of the 22 spans which is equivalent to almost one kilometer. “For the three building stations, namely Balagtas, Guiguinto, and Malolos City, we have already completed the foundation works. In the Balagtas station, we are already at the construction of the platform level. Structural steel roof framing is already in preparation for its launching in the succeeding months,” she said. Verzosa added that at the Guiguinto station, the foundation works have been completed and that they are now working upward for the structural works of the stations. The two remaining launching gantries with a 50-meter span have also been started. The PNR Clark North 1 will have its depot at the Valenzuela Station wherein its trains will pass through Meycauayan, Marilao, Bocaue, Balagtas, Guiguinto, until it reaches Malolos City. The project has total budget of PHP106 billion, of which PHP93 billion came from Official Development Assistance (ODA) of the Japan International Cooperation Agency (JICA) while the Philippine government allotted some PHP13 billion. The PNR Clark Phase I will have 10 stations that will cut across the cities of Manila, Caloocan, Valenzuela, and the municipalities of Meycauayan, Marilao, Bocaue, Balagtas, Guiguinto, and Malolos City. Once completed, the train service is expected to serve 300,000 passengers every day and will reduce travel time between Malolos City and Tutuban from one hour and 30 minutes to only 35 minutes. 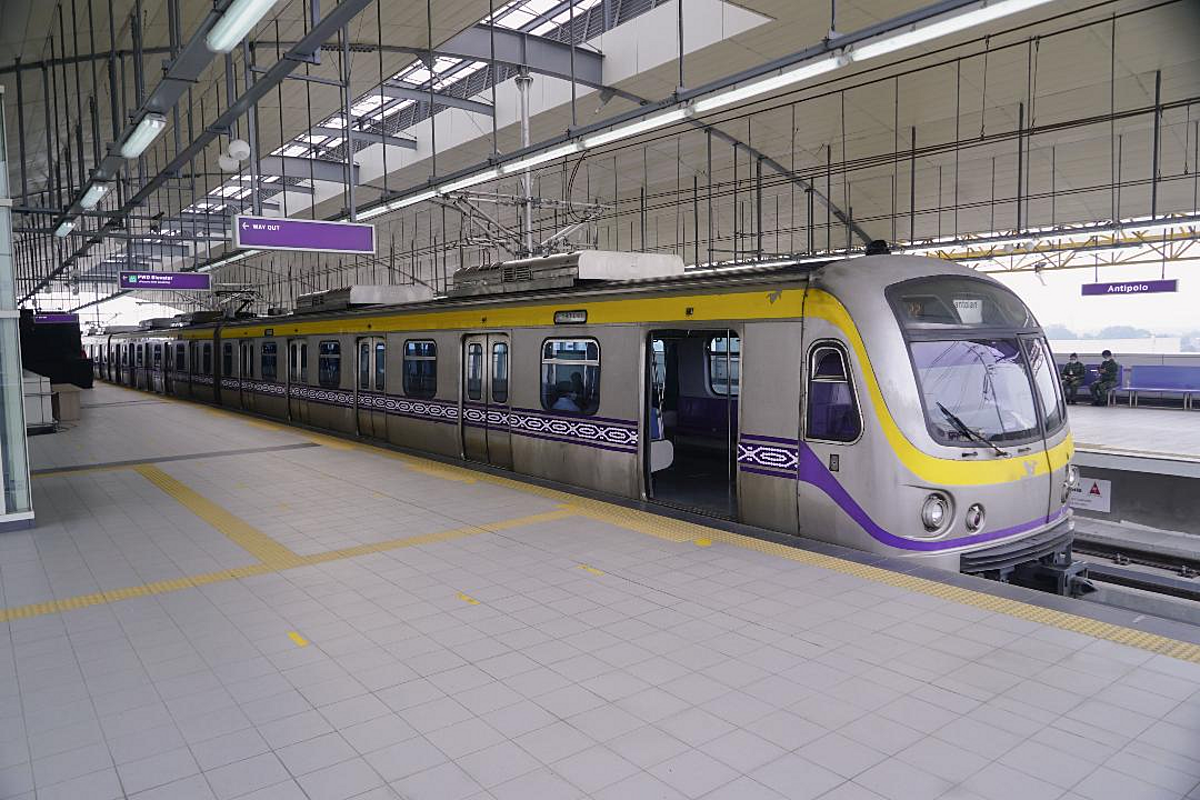 Photo Credit: Jacque Manabat, ABS-CBN News The two new stations of the Light Rail Transit Line 2 (LRT-2) – dubbed the LRT-2 East Extension -- will begin operations on July 5, the Department of Transportation (DOTr) said. In a media bulletin, the DOTr said the rail service, which will soon run from the Recto Station in Manila to the Antipolo Station, has also increased the number of its running trains to eight, from the five trains that previously ran from the Recto to the Santolan stations. “Once operational, the LRT-2 East Extension Project will reduce travel time from Claro M. Recto in Manila to Masinag in Antipolo from three hours via bus or jeepney, to just 30 to 40 minutes,” the DOTr said. In a Facebook post, Transportation Secretary Arthur Tugade said the project would be inaugurated on Thursday with President Rodrigo Duterte and Light Rail Transit Authority (LRTA) Administrator Reynaldo Berroya as guests. “The promise of a better commuting experience will now become a reality,” he said. The LRT-2 East Extension, he said, adds 3.793 km. to the present 13.8 km. of the LRT-2 line with two new stations – the Marikina-Pasig and Antipolo stations. “The project shall likewise increase the rail line’s average daily passenger capacity from 240,000 to 320,000,” Tugade said. He said aside from providing another means of transport to commuters, the project is expected to help reduce traffic congestion along the Marcos Highway, “especially in Marikina, Pasig, and Antipolo, given that road transport passengers will be redirected to riding the train.” During its construction, he said, “at least 1,800” jobs were generated, in addition to the 170 rail personnel employed to work in the two new stations. The project, which has been part of the “Master Plan for Metro Manila” since 1999, was approved by the National Economic and Development Authority Board on Sept. 4, 2012. The construction of its viaducts began in April 2015. The “full blast” construction of the two new stations started on Feb. 20, 2017, with a PHP1.1 billion contract, while the contract for the project’s electromechanical systems was awarded on Dec. 14, 2018 for PHP3.4 billion.    Article Courtesy of Raymond Carl Dela Cruz - Philippine News Agency 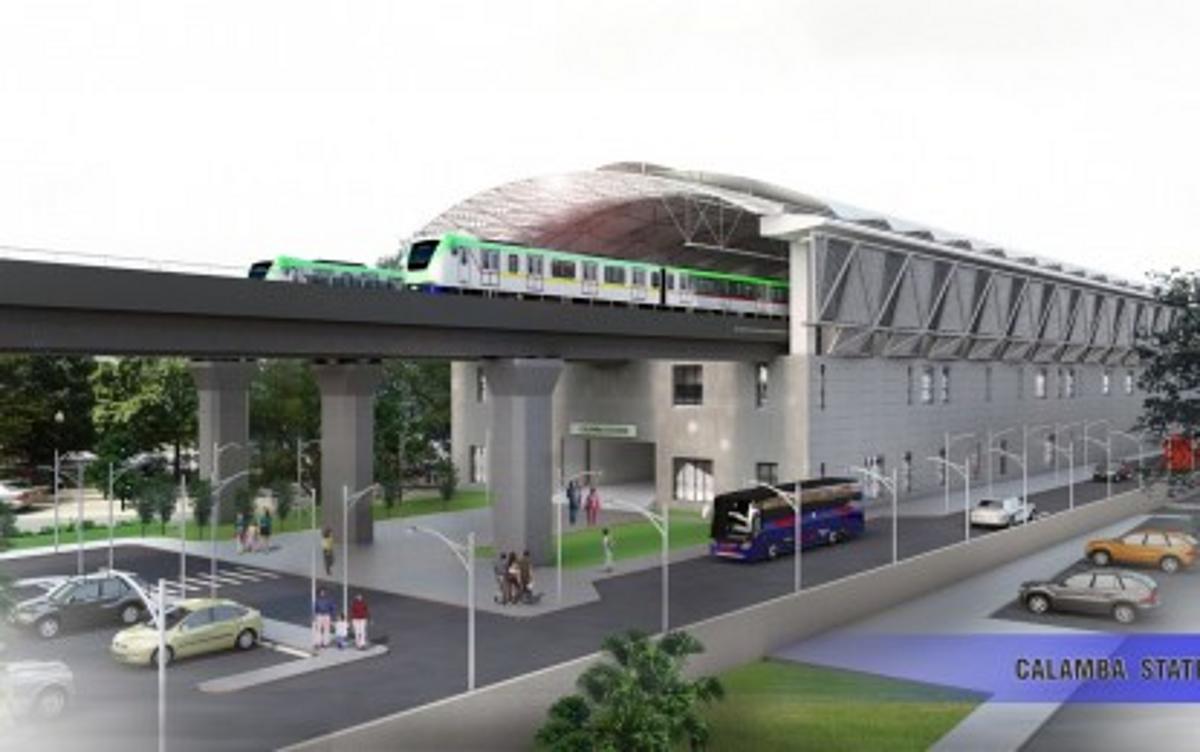 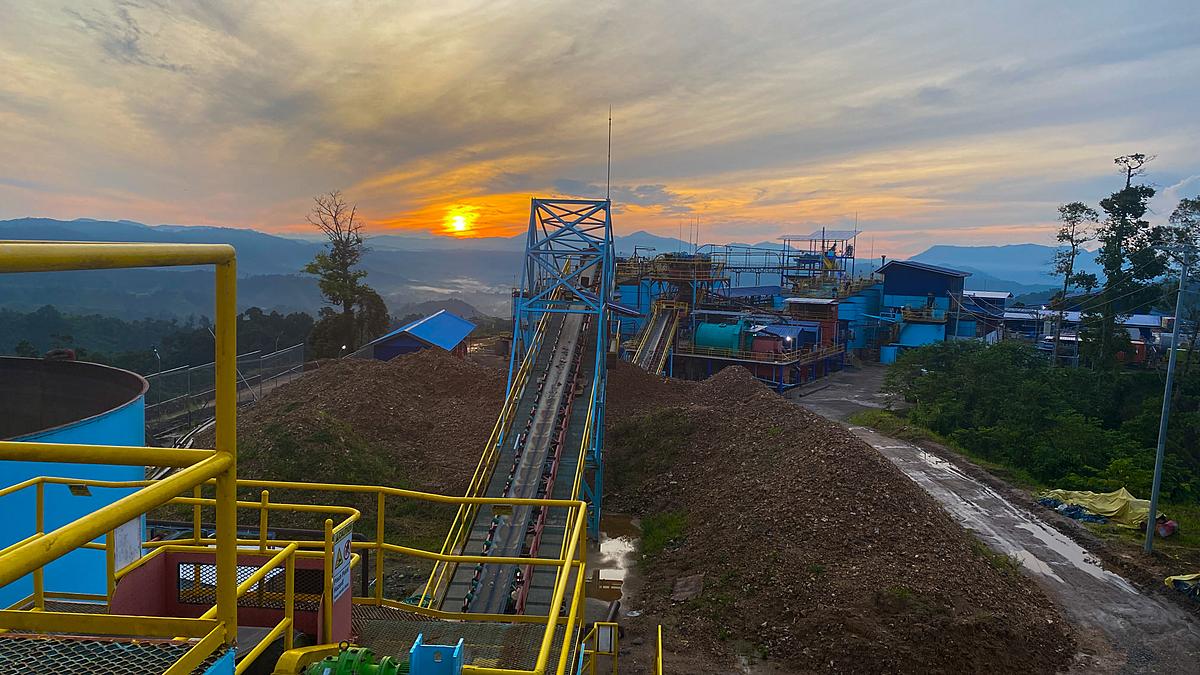 TVI Pacific Inc. is pleased to announce the completion of a second shipment of gold doré from the Balabag gold and silver project. Balabag is owned 100% by TVI Resource Development Phils., Inc. a Philippines corporation in which TVI holds a 30.66% interest, and is located in Zamboanga del Sur, Philippines.  Continuing Gold Production at Balabag Gold-Silver Project : Further to the announcement of September 30th, 2021, in which the Company announced the first shipment of gold doré from Balabag and reported various operating statistics, TVIRD has further confirmed that Balabag mill plant availability month-to-date has been 85% and that it is currently processing at a month-to-date average rate of 1,064 tpd.  The second shipment in the amount of 894 kg of gold doré has been delivered to the designated refinery and contains 641 ounces of Au and 27,552 ounces of Ag for 992 gold equivalent ounces.  Gross proceeds from the second shipment are US $1.8 million.  The second shipment of gold doré follows the completion of the first shipment on September 30, 2021.  Activities at site continue to be concentrated on optimizing the operation and the ramping-up of throughput to 2,000 tpd.  The average head grade month-to-date has been 1.8 g/t Au and 95.1 g/t Ag while the average recoveries month-to-date have been 93% for Au and 86% for Ag. The run of mine ("ROM") mineralized stockpile, in-pit stockpile and crushed mineralized stockpile currently contains an approximate 100,000 tonnes of mineralized material, much of which is low to marginal grade and continues to be mined to expose the higher-grade mineralized resource during waste stripping and bench forming.  The stockpiles have an average grade of 1.3 g/t Au and 47.7 g/t Ag.  It is expected that the average grade of feed will increase as higher-grade mineralized resource is mined.  Ongoing exploration drilling is continuing at Balabag with TVIRD having completed to date twenty-six (26) drillholes for a total meterage of 3,720 meters in its Phase 5B drilling program.  A total of twenty-eight (28) holes are expected to be drilled with an estimated meterage of 4,200 meters.  The Phase 5B drilling program together with assays and reporting is currently expected to be completed in Q4 2021. "We are pleased with the progress at Balabag having now completed the second shipment of gold doré within days of the first shipment being delivered to the designated refinery.  Our focus continues to be to further ramp-up throughput as we continue to optimize the process but in general the equipment is working well", said Mr. Cliff James, Chairman and CEO of TVI and Chairman of TVIRD, "We look forward also to our soon being able to share with all stakeholders the results of Phase 5B drilling as TVIRD continues to pursue its growth strategy with ongoing drilling at Balabag." 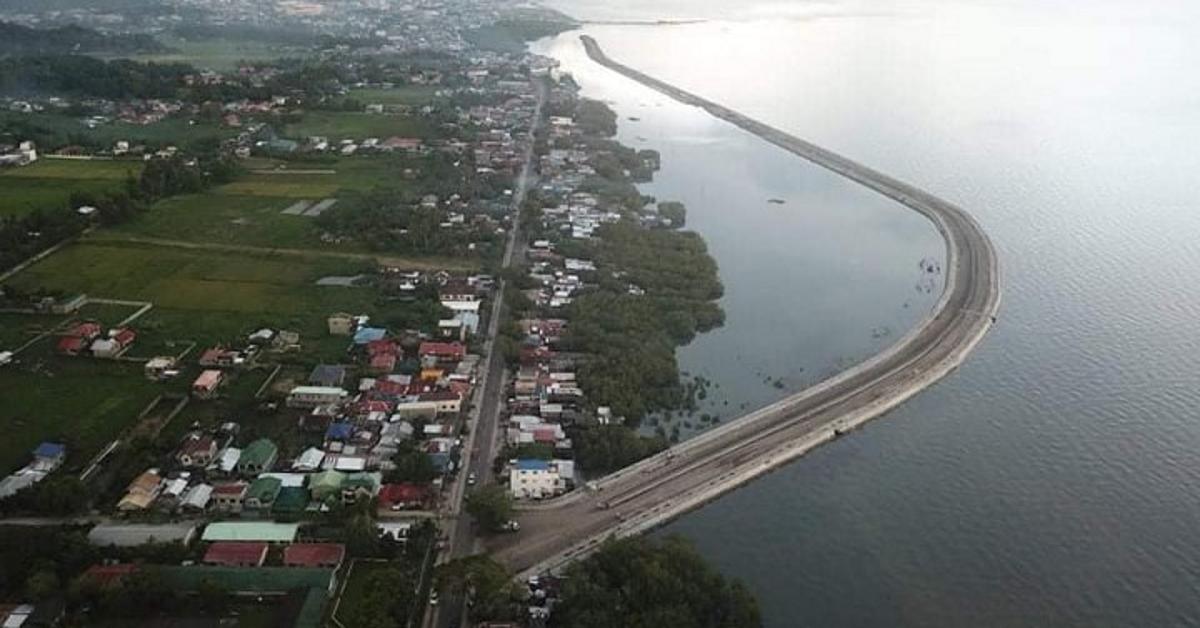 A portion of the Calbayog City Coastal Road project in Calbayog City. The project, which is up for completion in 2025, is now 83 percent complete, the Regional Development Council’s regional project monitoring committee reported on Monday (Oct. 18, 2021). (Photo courtesy of Mel Senen Sarmiento) About 83 percent of the Calbayog City Coastal Road Project is now completed after four years of implementation, the Regional Development Council’s regional project monitoring committee (RPMC) reported on Monday. Construction of the PHP1.16-billion project meant to curb traffic jams in Calbayog’s commercial district has been implemented since 2018.  It involves the construction of a road, embankment, and bridge.  The government is eyeing to complete the project in 2025. “The construction of the Calbayog City Coastal Road aims to create alternative routes in the city to decongest traffic in Calbayog City proper. However, certain segments of the already funded network have yet to break ground,” the RPMC reported. It will start with the construction of a bridge across the Calbayog River since the work will affect the docking of motor boats carrying passengers and products to island communities. The Department of Public Works and Highways (DPWH) and Philippine Ports Authority will find a spot as a temporary dock for the motor boats.   “Calbayog City is a fast-growing commercial hub. With its flourishing economy comes the need for bigger and better thoroughfares to accommodate the increasing traffic volume and weight,” the DPWH Samar first district engineering office said in a separate statement.  From 2018 to 2021, the project’s work is centered on the construction of embankment and road with a total allotment of PHP1.14 billion. Of the total, PHP333.71 million was released in 2018, PHP281.07 in 2019, PHP268.52 million in 2020, and PHP265.76 million in 2021.  The multi-year project that will build a 4.67-kilometer road and bridge will connect the villages of Rawis, San Policarpo, Aguit-itan, allowing vehicles to by-pass the busy road of Calbayog City’s commercial district. By Sarwell Meniano   Article courtesy of the Philippine News Agency 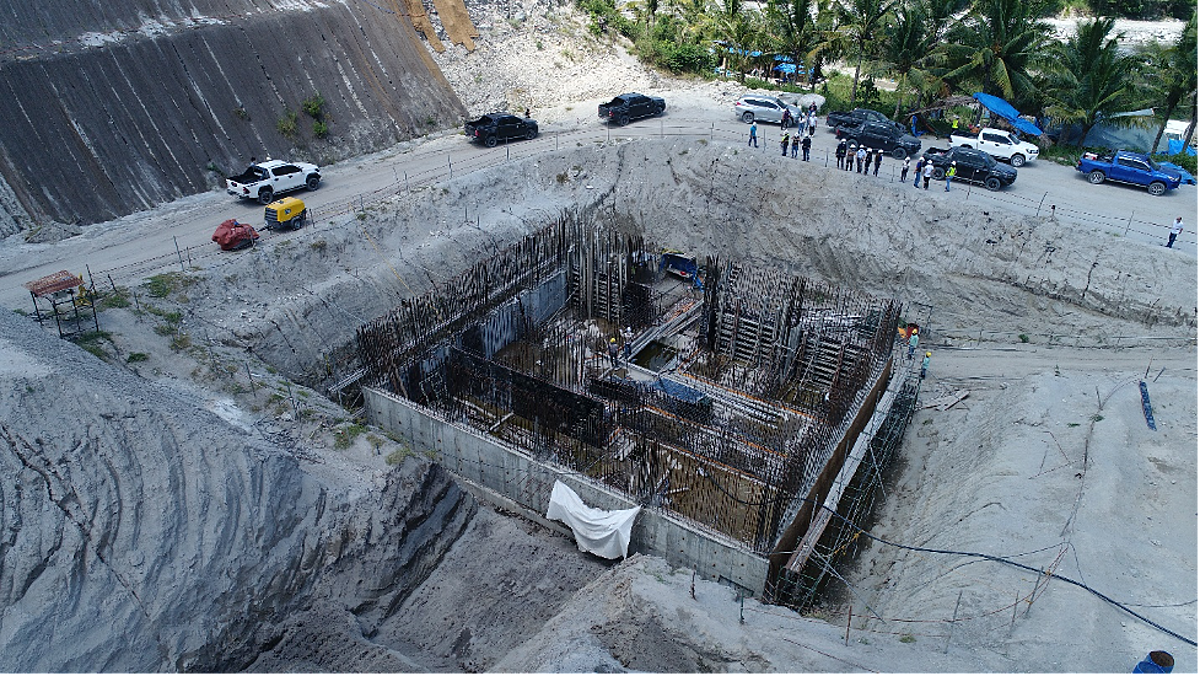 The Alsons Power group’s 14.5 mega-watt (MW) ₱ 4.5 billion run- of- river hydroelectric power plant at the Siguil River basin in Maasim, Sarangani Province is on- track to begin operations in 2022 to provide a source of renewable power to key areas of Mindanao. The photo shows ongoing work on the plant’s powerhouse that will contain the hydropower turbine and generator set which will produce electricity using water from the Siguil River. It will also house the power facility’s control Room and offices for administration, operations and maintenance. Alsons Power- Mindanao’s firs private sector power generator plans to develop at least seven more run of river hydro power facilities in different parts of Mindanao and Negros Occidental.  The group currently operates four power facilities in Mindanao with a total generating capacity of 468 MW serving over 8 million people in 14 cities and 11 provinces. 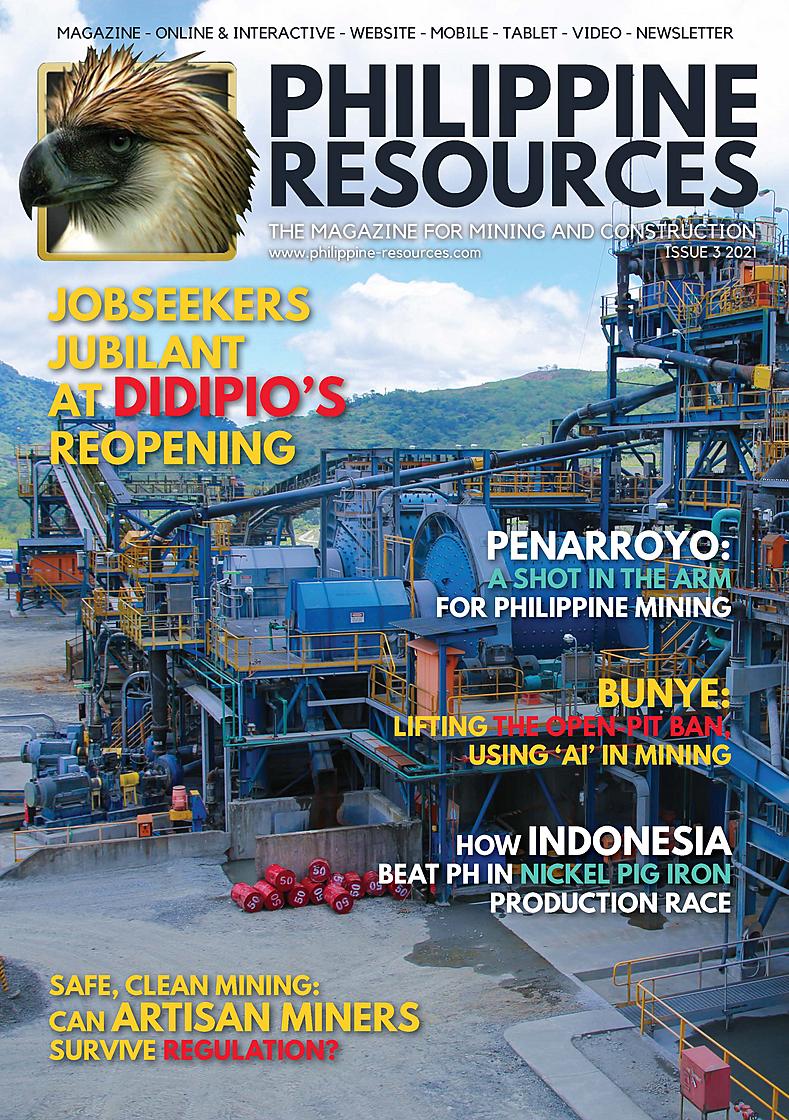 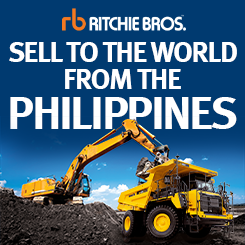